Passion Has a Funny Way of Trumping Logic

What Do You Bring to Your Team

The Game Does Not Define You

Be the Best Version of Yourself

Coach the Person Not Just the Athlete

Thank you @FastpitchMaster for putting on a great camp today! I had so much fun and learned some new drills. Also a big thank you to all of the coaches that came and made it possible! @NEQuakes_Scott @SoftballValley @Avila_Softball @EState_Softball @UIU_Softball @QuakesRecruit

Softball players come in all shapes & sizes. Have you ever been told you are too small to play in college? I checked the rosters of girls 5’6” & under at Super Regionals.
FSU 12
Washington 12
JMU 11
VT 10
UCLA 9
Florida 8
UGA 7
Oklahoma 4
Don’t worry about what you can’t control!

Softball is a game that's actually played on a 5-inch field: The distance between your ears.

listen, you will get punched in the face by this game

the pain, the embarrassment, the self examination that comes with that

but only if you accept the challenge

and start throwing punches harder than the one you took

Very funny! On a serious note we couldn't play the

Happens to the best of them! #USSSAFastpitch #Po

Bad energy and negative talk in the dugout can kil

Learn to compete now and you'll work hard for anyt

YOU control how good you want to be. #USSSAFastpi

Carry yourself with lots of confidence. #USSSAFas

Utility players are so valuable! You are never too

Work for what you want!💯 #USSSAFastpitch #Powe

Coach for the right reasons! Be proud just to see

Being a great teammate is so valued in the college

Where are all my parents that have catchers?😂

Let your kids be pushed out of their comfort zone!

You can hate losing and still lose gracefully. #U

Passion Has a Funny Way of Trumping Logic

June 11, 2021 |Comments Off on Passion Has a Funny Way of Trumping Logic 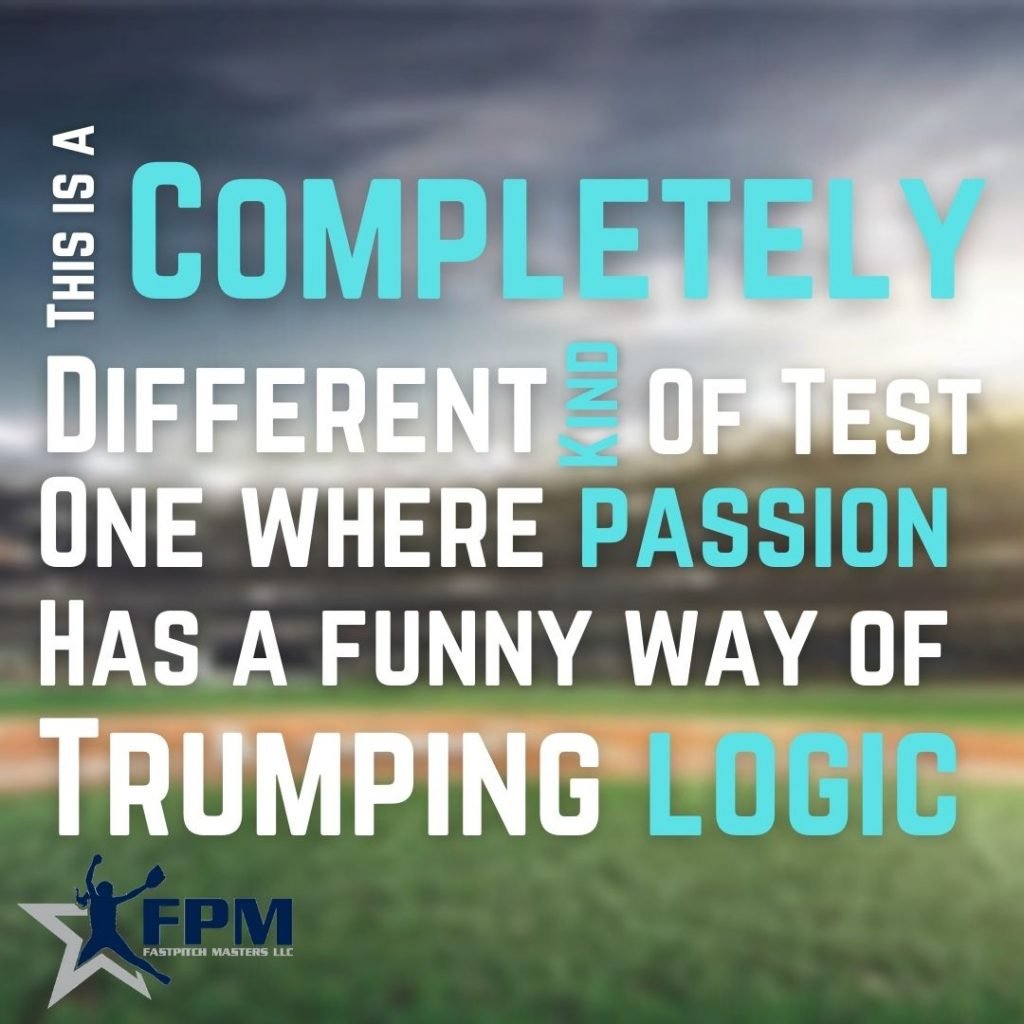 “This is a completely different kind of test, one where passion has a funny way of trumping logic.”

This quote comes from the 2013 Alabama University motivational softball video. This quote is part of why the game of softball is so exciting and competitive. You never know who’s going to win. You can have a good idea of who might come out on top based on season records and other stats, but you never know who’s going to show up that day and dominate.

Elite levels of softball and all sports have players with high competitive drives. At the top level, winning is extremely important to everyone involved. This quote is another example of coaches claiming that hunger to compete and passion are much more important than talent. Talent will help you win a lot of games, but passion will win you championships.

Sue Enquist (former UCLA Head Softball Coach) also agrees with then when she said, “What I love about the game is that the game doesn’t know who is supposed to win.” The game is so dependent on everyone involved that there has to be a team full of players who want to win just as bad as the person standing next to them. Softball is not a game won or lost by 1 or 2 players. Success in softball ultimately comes down to how hard you’re working to make your team and yourself the best.